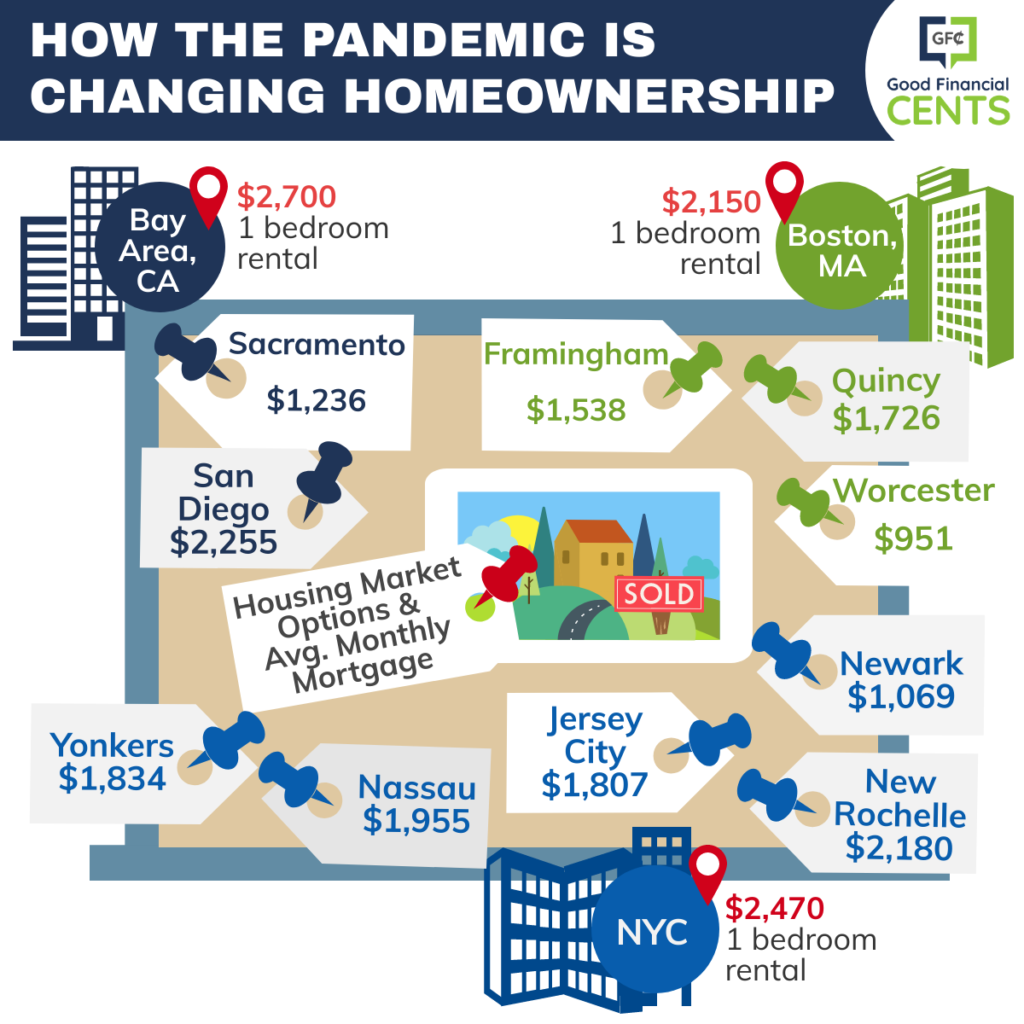 Thereâs something weird happening with the real estate markets today. Normally in a recession, demand for rentals goes up while demand for houses goes down. But if thereâs anything 2020 has taught us, itâs that everything is turned on its head right now.

Instead, weâre seeing an interesting trend: despite the ongoing pandemic, home-buying is experiencing higher demand now than they have been since 1999, according to the National Association of Realtorsâ (NAR). If youâve been hoping to buy a home soon, youâre probably already aware of this weird trend, and excited. But is it the same story everywhere? And is a pandemic really the right time to buy?

How the Pandemic is Changing Homeownership

This pandemic is different from any other in history in that many people â especially some of the highest-paid workers â arenât being hit as hard as people who rely on their manual labor for income. This, coupled with an ultra-low mortgage rate environment and a new lifestyle thatâs not fit for a cramped apartment, is creating the perfect storm of high-dollar homebuyers.

âI didnât want to pay someone elseâs mortgage to have three roommates,â says Amy Klegarth, a genomics specialist who recently purchased a home in White Center, a suburb of Seattle where she was formerly renting. âI moved because I could afford to get a house with a large yard here for my goats, Taco and Piper.â

Whether you have goat kids or human kids (or even no kids), youâre not the only one looking for a new home in a roomier locale. According to the NAR report, home sales in suburban areas went up 7% compared to just before the pandemic started. In some markets, itâs not hard to understand why people are moving out.

Where Are People Going?

Apartments are small everywhere, but theyâre not all the same price. For example, homes in cities tend to be 300 square feet smaller than their suburban counterparts. Some of the hottest home-buying markets right now are in areas where nearby rents are already too high, often clustered around tech and finance hubs that attract high-paid workers. After all, if you canât go into the office and all of the normal city attractions are shut down, whatâs the point of paying those high rental costs?

According to a December 2020 Zumper report, the top five most expensive rental markets in the U.S. are San Francisco, New York City, Boston, San Jose, and Oakland. But if youâre ready to buy a home during the pandemic, there are nearby cheaper markets to consider.

If You Rent in San Francisco,  San Jose, and Oakland, CA

Big California cities are the quintessential meccas for tech workers, and thatâs often exactly whoâs booking it out of these high-priced areas right now. Gay Cororaton, Director of Housing and Commercial Research for the National Association of Realtors (NAR), offers two suggestions for San Francisco and other similar cities in California.

First, is the San Diego-metro area, which has a lot to offer people who are used to big-city living but donât want the big-city prices. An added bonus: your odds of staying employed as a tech worker might be even higher in this city.

âProfessional tech services jobs make up 18% of the total payroll employment, which is actually a higher fraction than San Jose (15.5%) and San Francisco (9.3%),â says Cororaton.

If youâre willing to go inland, you can find even cheaper prices yet in Sacramento. âTech jobs have been growing, and account for 7% of the workforce,â says Cororaton. âStill not as techie as San Jose, San Francisco, or San Diego, but tech jobs are moving there where housing is more affordable. Itâs also just 2 hours away from Lake Tahoe.â

If You Rent in New York, NY

Living in New York City, it might seem like you donât have any good options. But the good news is you do â lots of them, in fact. They still might be more expensive than the average home price across the U.S., but these alternative markets are still a lot more affordable than within, say, Manhattan.

âNAR ranked Nassau as one of the top places to work from home in the state of New York because it has already a large population of workers in professional and business services and has good broadband access,â says Cororaton. If you have ideas about moving to Nassau youâll need to move quickly. Home sales are up by 60% this year compared to pre-pandemic times.

If you donât mind moving to a different state (even if it is a neighbor), you can find even lower real estate prices in New Jersey. This might be a good option if you only need to ride back into the city on occasion because while the PATH train is well-developed, itâs a bit longer of a ride, especially if you live further out in New Jersey.

If You Rent in Boston, MA

Boston is another elite coastal market, but unlike New York, thereâs still plenty of space if you head south or even inland. In particular, Quincy and Framingam still offer plenty of deals for new buyers.

If you like your suburbs a bit more on the urban side, consider Quincy. Although itâs technically outside of the city, itâs also not so isolated that youâll feel like youâre missing out on the best parts of Boston-living. Youâll be in good company too, as there are plenty of other folks living here who want to avoid the high real estate prices within Boston itself.

Framingham is undergoing an active revitalization right now in an effort to attract more people to its community. As such, youâll be welcome in this town thatâs only a 30-minute drive from Boston.

âNow, if you can work from home, consider Worcester,â says Cororaton. âItâs an hour away from Boston which is not too bad if you only have to go to the Boston office, say, twice a week.â Worcester (pronounced âwuh-sterâ) is also a great place for a midday break if you work from home, with over 60 city parks to choose from for a stroll.

*Average home mortgage estimates based on a 20% down payment.

Should You Buy a House During a Pandemic?

Thereâs no right or wrong answer here, but itâs a good idea to consider your long-term housing needs versus just whatâll get you through the next few months.

For example, just about everyone would enjoy some more room in their homes to stretch right now. But if youâre the type of person who prefers a night on the town, you might be miserable in a rural area by the time things get back to normal. But if youâve always dreamed of a big vegetable garden or yard for the family dog, now could be the right time to launch those plans.

Another factor to consider is job security. And remember that even if youâre permanently working from home today â and not everyone has this ability â living further from the city could limit your future opportunities if a job requires you to be on-site in the city.

Finally, consider this: most homes in outlying areas werenât built with the pandemic in mind. For example, â… open floor plans were popular, pre-pandemic,â says Cororaton. âIf the home for sale has an open floor plan, youâd have to imagine how to reconfigure the space and do some remodeling to create that work or school area.â

Here are some other things to look for:

Is It More Affordable to Buy or Rent?

There arenât any hard-and-fast rules when it comes to whether itâs cheaper to rent or buy. Each of these choices has associated costs. To rent, youâll need to pay for your base rent, pet fees and rent, parking permits, deposits, renters insurance, and more. To buy, youâll have an even bigger list, including property taxes, maintenance and upgrades, HOA fees, homeowners insurance, closing costs, higher utility bills, and on.

Each of these factors has the potential to tip the balance in favor of buying or renting. Thatâs why it makes sense to use a buy vs. rent calculator that can track all of these moving targets and estimate which one is better based on your financial situation and the choices available to you.

In general, though, most experts advise keeping your housing costs to below 30 percent of your take-home pay when setting up your budget. The lower, the better â then, youâll have even more money left over to save for retirement, your kidâs college education, and even to pay your mortgage off early.

As the real estate industry continues to advance, technology expands into the homebuying journey âÂ making it easier for homebuyers to find the home they love in less time than ever before.

The post 5 A.I. Programs That Aims to Make Your Homebuying Journey Easier appeared first on Homes.com.